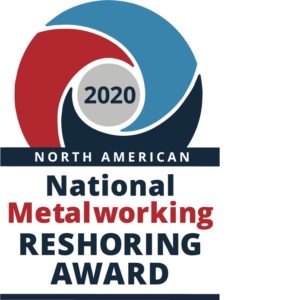 Four leading manufacturing associations have announced the 3rd National Metalworking Reshoring Award. Companies that have successfully reshored products, parts or tooling made primarily by metal forming, fabricating, casting or machining, including additive manufacturing, are invited to apply. The Reshoring Initiative, the PMA, NTMA, and AMT are pleased to sponsor this competition.

To be eligible for the award, the work must have been reshored between January 1, 2013, and May 31, 2020, from outside North America to North America. Reshoring includes work that is produced either in-house or outsourced. A complete definition of reshoring is available here. Applications must be submitted by June 30, 2020. To view award details and enter to win, visit www.amtonline.org/reshoringaward.

“In 2018 over 1,300 companies announced they were shifting jobs to the U.S. from offshore, up 38% from 2017. Jobs reshored since 2010 account for 3.3% of total U.S. manufacturing employment,” said Harry Moser, founder and president of the Reshoring Initiative. “There is still time for companies to decide to reshore and be eligible for the Award. We also hope that other associations will choose to support similar awards to show that their industries are also now successfully reshoring.”

Sherrill Manufacturing received the 2019 National Metalworking Reshoring Award in recognition of the company’s success bringing manufacturing back home to the United States. Sherrill’s success demonstrates that it is feasible to reshore completely lost product categories. When Oneida Limited ceased operations, all U.S. flatware production had been lost, primarily to Asia. Sherrill Mfg. took over the Oneida flatware factory, launched innovative products under the Liberty Tabletop brand, and found a more efficient way to market those products.

The Reshoring Initiative, founded in early 2010, helps manufacturers realize that local production, in some cases, reduces their total cost of ownership of purchased parts and tooling. The Initiative also trains suppliers how to sell against lower priced offshore competitors.

AMT – The Association For Manufacturing Technology represents U.S. builders and distributors of manufacturing technology – the advanced machinery, devices and digital equipment that U.S. manufacturing relies on to be productive, innovative, and competitive. AMT acts as the industry’s voice to speed the pace of innovation, increase global competitiveness and develop manufacturing’s advanced workforce of tomorrow.

NTMA is the voice for the precision manufacturing and tool and die industries in the United States. Backed by nearly 1,300 member companies, representing more than $30 billion in sales, NTMA provides an array of benefits to members and the industry including advocacy in Washington, training and education programs and networking events nationwide.

IMTS 2020 will be the 33rd edition of the premier manufacturing technology show in North America. IMTS 2018 hosted the highest number of exhibiting companies ever (2,563) and was the largest in number of registrations (129,415) and in net square feet of exhibit space (1,424,232) at the McCormick Place complex. IMTS is held every even-numbered year in Chicago and attracts buyers and sellers from 117 countries.