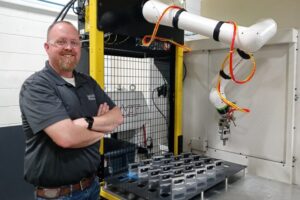 Under the leadership of Kurt Wagner, the company’s second-generation owner, Wagner Machine has heavily invested in automation across its milling and turning production departments. Image courtesy of Wagner Machine.

With the bar for productivity continuing to rise, single-shift shops might well be thought to be struggling. But for Wagner Machine, a second-generation family-owned contract manufacturer in Champaign, Ill., hefty investments in automation ensure that one shift is enough.

Bar feeders have long populated the company’s turning department, and in recent years Wagner has added a growing fleet of machine-tending collaborative robots to automate three- and five-axis milling. Yet technology has not been the sole reason for Wagner’s automation success — its philosophy toward automation has been just as important. Namely, the shop does not target 24/7 unattended machining.

“If you can load a bar into a machine and let it run for an hour into the evening, that’s over a 10% production improvement,” Kurt Wagner says.

Two to four hours of automation effectively “increases the length of the day” without adding a second shift, says second-generation owner Kurt Wagner. Some jobs do reach the full 24-hour mark, but by refusing to treat full automation as a necessity, Wagner Machine has widened the range of work for which automation is applicable. “If you’re trying to get 24/7 production, that takes a lot more planning than just trying to bump your production by 50%,” Kurt Wagner says.

Originally founded as a manual turning and milling shop for small parts in 1982, Wagner Machine bought its first CNC mill and CNC lathe within a year. The company has kept an eye on technology trends since, from its initial adoption of bar feeders and Swiss-type lathes in the early 2000s to more recent investments in metal additive manufacturing.

Even before the company bought its first bar feeder, the team knew that turning jobs running slightly into the evening achieved greater productivity. “It was obvious that unattended production was a big benefit,” Wagner says, and purchasing bar feeders proved this out. “If you can load a bar into a machine and let it run for an hour into the evening, that’s over a 10% production improvement.” Today, 75% of the lathes at Wagner Machine are equipped with bar feeders.

Recent investments in the milling department have enabled it to catch up in productivity. Wagner bought four, three-axis FANUC RoboDrills to handle high-speed milling, as well as five more five-axis RoboDrills. The linchpin in the department’s success, however, has been the addition of FANUC CRX collaborative robots (or, cobots) to automate machine tending.

But where Wagner Machine never expected every automated turning job to run all night, the company’s initial attempts to automate milling proceeded with this expectation. These automation attempts were marked by process control, coolant overflow and chip problems, and efforts to perfect the automated programs proved time-consuming. For a shop with a varied mix of work that tends to see production jobs last between a few days and a month, this perfectionism was a trap.

To bypass these issues, the company adjusted its expectations for milling automation to be in line with its expectations for turning automation. This means focusing on automation that can be reliably set up in a single shift, typically resulting in around two to three hours of unattended machining per night. Automation for longer-running jobs might justify some extra time for refinement, but generally the company gets its machines running as quickly as possible. “You can’t spend three days automating a five-day job,” as Wagner says.

Wagner Machine took its first step into robotic automation seven years ago, when a friend of Wagner’s father offered the company an old robot for free. That machine-tending robot and a second traditional robot are still on the floor. However, the company has recently standardized on cobots, which Wagner says are less expensive, are easier to integrate and occupy less floorspace.

While cobots are slower than traditional robots, with Wagner’s FANUC cobots hitting a max speed of 10 inches per second, the company sees this as a benefit. Wagner Machine even slows down its faster robots to move closer to this speed. “Many industrial robots can move over six feet per second, but if anything goes wrong at that speed, you’re going to cause serious damage,” Wagner explains. Load times are still under 30 seconds at the company’s slower speeds, and process security is much improved with the knowledge that the robots will not damage either themselves or an expensive CNC machine.

While regular quality checks add time during the day shift, Wagner says that certainty in the machines’ consistency is what enables the company to perform unattended machining at night.

Wagner Machine proves its automated processes by running unattended trials during the day, then allowing limited runs in the evening. These test runs help Wagner detect any glaring issues and optimize around them, ensuring the lights-out process is repeatable.

Most parts require new grippers and part positioning trays, and all new parts require at least slight modifications to the robot program. Even so, the company has found automation profitable for jobs with quantities as low as 300 parts or jobs that require at least 50 hours of total machining time. For example, one low-quantity job with long cycle times would have taken six days to run manned, but Wagner automated it in a day and completed it in two days thanks to overnight automation.

As part of simplifying its automation process, Wagner Machine has focused on several key refinements, including:

In the last year, robotic automation has helped the production milling team increase productivity by more than 30% while improving on-time delivery. Wagner has ordered more cobots to fill additional cells and replace its original free robot. Wagner is also looking into the feasibility of using cobots to tend CMMs at night or automate deburring and assembly. Whatever it decides to do, the future of Wagner Machine looks increasingly automated.