Reich Tool and Design was founded in 1956 as a tool and die shop. Since then, it has expanded into contract machining as a way to address the ups and downs in the tool and die industry.

Reich Tool and Design was founded in 1956 as a tool and die company. Since then, the company has expanded far beyond its roots to include three-, four- and five-axis milling; turning; wire EDM; waterjet machining; and laser welding for industries including aerospace, medical, appliance and robotics/automation. RTD also has a sister company, Trinity Precision Solutions, that has an ultrasonic wash line to provide part washing and passivation as well as cleanroom assembly and packaging. “We’re not afraid to invest in technology,” says company president Fritz Reich. “It goes to our vision statement to anticipate and respond to advanced manufacturing needs with perseverance and dedication,” his brother, Vice President Brett Reich adds. 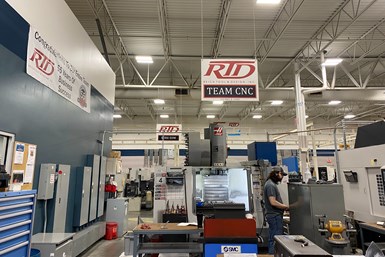 Although RTD’s commitment to investing in new machining technology has not changed, its thinking has. Initially, it focused its new technology investments on adding new processes. But as the industry has changed, the company has broadened its focus to include automation as well.

RTD’s wide array of machining technologies, as well as its automation plans, differentiated the shop in the 2021 Modern Machine Shop Top Shops Survey, and secured its place as the honoree in the Machining Technology category.

Expanding Beyond Tool and Die

Until the mid-1980s, all of RTD’s tool and die work was done on manual machines. That’s when Fritz convinced his father, company founder Fred Reich, to add a wire EDM. “We used to do what we call contour and form grinding, which would take hours and hours and hours, where EDM would take a fraction of that time,” he explains.

In fact, wire EDM was becoming a necessity to stay competitive in tool and die, and Fritz wanted to bring that work in house instead of sending it out. It was much more expensive than any other machine the company had purchased, but Fritz promised that he would learn how to program and operate the machine. It worked out well, and RTD started taking wire EDM work from other shops in the area. 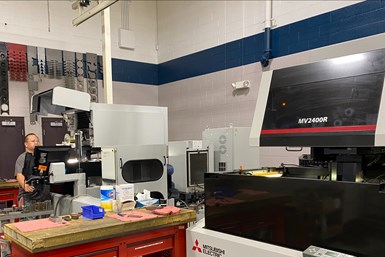 RTD’s first major investment in CNC machining technology was a wire EDM machine in the mid-1980s, which replaced time-consuming contour and form grinding processes. Today, the shop has four wire EDM machines and an EDM drilling machine in its cell.

But the tool and die industry has a lot of ups and downs. Rather than lay off employees during down times only to rehire them later, the company sought to broaden its scope. Fritz says that it was typical of tool and die shops to expand into metal stamping. This is low-hanging fruit for tool and die shops because building metal stamping dies requires testing them, and it’s a short leap from testing dies to running them. It’s a bigger leap from tool and die making to producing parts for aerospace industry, but that was RTD’s goal. It got its first CNC milling machining in the early ‘90s and started taking on contract machining work. Once it got its first aerospace job, this portion of the business started to grow rapidly.

In the 2000s, RTD added a clean room facility as a way to support and expand 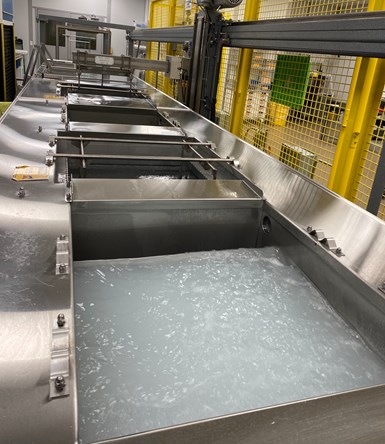 RTD added a clean room facility with an ultrasonic wash line to support and expand its contract machining work in the medical industry. The shop has found that these services are also in demand in the aerospace industry.

its contract machining work in the medical industry. Fritz’s brother-in-law had experience building clean rooms at other companies, so RTD brought him on board and set up a sister company, Trinity Precision Solutions, with a class 10,000 clean room that provides parts cleaning services as well as cleanroom assembly and packaging. “There’s a lot of machined components that we probably wouldn’t be doing if we didn’t have the ability to offer the washing and cleanroom environment for packaging,” Brett says.

Although Trinity was established specifically to reach medical customers, the brothers say it has been a big draw for the aerospace industry, which Fritz says is really taking off right now. “It’s very specialized stuff, and it fits us pretty well.”

RTD continues to invest in new technology. Although the shop has added new capabilities in recent years, it is more focused on increasing capacity. Amid a shortage of skilled workers, leadership sees automation as a means to “multiply our technology to increase our sales,” Fritz says.

Previously, automating meant adding bar feeders to its lathes, and a pallet system to one of its DMG MORI five-axis machines, which has allowed the shop to do some lights-out machining. But now, with the availability of robotic systems with the flexibility to handle low-volume work, RTD has outlined a multi-stage plan to automate more areas of its shop.

The company recently completed the first step of the phase one plan: adding a new, modular workholding system from Erowa to its wire EDM cell. This consists of flat chucks on the machine table and a combination flexible clamping elements including vises and clamping beams that allow operators to quickly set up parts offline. The company also purchased a PreSet Basic, which is a rolling cabinet that can be staged beside a machine, and provides a station for setting up and aligning workpieces. RTD also customized a Lista cabinet to house all of the workholding devices in foam, which will work with the new set-up station. In addition, it’s working on building out a custom designed pallet fixture that will be able to hold multiple parts, as well as a custom designed set-up station and lifting fixture that will work with the pallets to maximize efficiency.

Fritz says that in total, the shop has invested roughly $100,000 in just tooling. But he adds that the system, which is about 70% complete, has already noticeably increased machine hours, although its final effect on productivity won’t be determined until the system is fully implemented.

The Erowa workholding system is designed to be compatible with the company’s Robot Dynamic automation system, which is phase two of RTD’s plan. Ideally, Fritz says that the automation system will be able to communicate with the shop’s new ERP system, providing information on equipment and operator performance and notifying the team of maintenance requirements. The ERP would then hopefully be able to communicate scheduling updates and information on work in progress to the customers. He adds that RTD will likely begin implementing phase two within the next year or two. And although the technology isn’t yet widely available, the Fritz envisions a phase three that includes GPS-guided robots that will move parts across the shop floor. 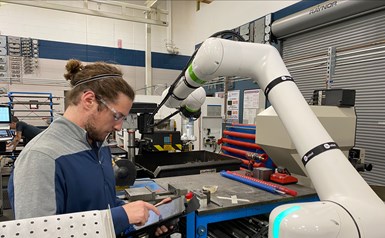 The shop is implementing an automation plan in order to help it expand capacity. This Acieta FastLoad system with a cobot arm and staging area for parts will be used for machine tending in the turning and milling departments.

The shop also recently added an Acieta FastLoad system, which combines a cobot arm with a shelving system for staging parts to automate machine tending in its turning cell. Once RTD has this system performing well, it hopes to add more to automate other departments, including milling.

RTD’s search for a new ERP system is also driven by its desire to automate. Developed in-house for tool and die work, the existing system requires a lot of manual input in order to gather all of the data required to produce an accurate schedule. The shorter lead times of contract machining necessitate a more automated solution. At the same time, the new system must be able to handle the complexity of tool and die work. A stamping die can have hundreds of different components, and if there are multiple dies in the queue, that’s a lot of components for the ERP system to track. Brett says that the company has narrowed its search down to a handful of options.

RTD President Fritz Reich says that although it doesn’t happen often, some parts are handled by each of the shop’s three disciplines: tool and die, contract machining and cleanroom. These CT scanner imaging modules are one example of a part that requires work from all three.

In addition to its automation initiative, RTD has plans to add additional technology, and is considering even more options. It’s working on adding powder coat painting and reverse engineering services, as well as a second, 20,000-square-foot facility to house its fabrication processes, as well as a new, larger waterjet machine, freeing up space in its main building to add more labs for medical and aerospace machining. The company is also thinking about adding processes such as electropolishing. “We have a pretty diverse customer base, and we listen to them to find out what else can we offer that would be helpful,” Brett explains. “And that also gives us a leg up because the more turnkey we are, the more people will want to come to us.”