Instead of cutting lawns or flipping burgers this summer, high school junior Brandon Heimann putt in serious hours toward his future with a youth apprenticeship at JTD Enterprises, a machine shop in Chilton, Wis. 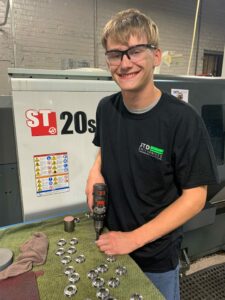 Wisconsin is an apprenticeship trailblazer. This year marks the 110th anniversary of the state’s registered apprenticeship system, but don’t let the age fool you. Their emphasis on youth apprenticeship and equity across generations is fundamental and keeps the talent pipelines flowing.

“I’m scheduled to work 7 a.m. to 4 p.m. Monday through Thursday, but I’m available to work Fridays or more than 40 hours a week if Julie wants me to,” says Brandon.

Julie is Julie Hoban, owner of JTD Enterprises and a passionate champion of the manufacturing industry and apprenticeships.

“We want to show kids what we do at JTD so that they know what career opportunities are out there for them,” says Julie. Knowing that Julie has an open-door policy when it comes to coordinating student tours, Brandon’s technical education teacher at Chilton High School coordinated a visit to JTD.

“Walking through the shop, it was cool to see how each machine made a part, and the process of making parts that are in products we use every day,” Brandon says. “The interest for me was there right away.”

“It’s exciting to see a student come in and immediately show interest. We could tell that Brandon would be a good fit,” says Julie. She learned that Brandon was influenced by his aunt, who is an engineer, and that Brandon had set his sights on becoming a mechanical engineer.

“I told him I will guarantee that he’ll become a better engineer if he works for us,” says Julie.

Husband and shop manager Tom Hoban says, “The best engineers were machinists first. Every guy in our shop will tell you that. They are less likely to over-design a part and make it unnecessarily difficult or expensive to make. They know what goes into making that part at the manufacturing level.”

JTD hired Brandon through the Youth Apprenticeship program operated by the Wisconsin Department of Workforce Development. The program enables employers to “hire high school juniors or seniors for a one or two-year apprenticeship. During the apprenticeship, the student continues toward high school graduation and takes courses related to the profession as a way of enhancing what is being learned on the job.”

On his first day at JTD Enterprises, Julie set up Brandon to meet employees throughout the shop (most were apprentices themselves) so he could understand some of the possible tasks and types of machinery. He began the day in the inspection area and learned the basics of measuring tools, then went on to a few stops on the production floor. He was exposed to CNCs, mills, lathes, welders, grinders, inspection and measurement equipment, assembly work, and a load/unload robot.

“Brandon is more technologically savvy than older guys,” says Julie. “I hope learning to operate the robot will be of interest to him. I want him to be able to go to school and tell somebody, ‘Hey, I got to run a robot today!’”

During his junior year in high school, Brandon will work part time through Career Capstone, a CTE program sponsored by Chilton High School. By that point, his wage rate will have progressed to the mid-teens (the state of Wisconsin dictates that apprentices will make at least 55% of a journeyman’s rate). The money is significantly better than his peers earn working in fast food or retail.

“Most of it goes into savings,” says Brandon. He also plays baseball, so some of his earnings go toward meals when the team goes out to eat. And then there’s that 16th birthday gift from his uncle. “I just put insurance and registration on my ’89 Camaro. I do all the TLC management and stuff like that on the car, and there’s a lot of work to be done.”

No matter what Brandon does with his money, he is getting a priceless education, especially when most high schools can’t afford a full, modern machine shop.

“There’s really nothing that should stop anyone from trying a youth apprenticeship,” says Julie. “Students getting paid while they learn, and they’re working toward a great career. If we can get more young people interested in the field, it’s worth it to invest time and money into youth apprentices.”

The Smartforce Student Summit at IMTS 2022 is poised to inspire thousands of students as it showcases the manufacturing technology classroom of the future. Students can expect interactive exhibits from leading industry manufacturers who will demonstrate breakthrough smart technologies such as additive manufacturing, augmented and virtual reality (AR/VR), automation and robotics, digital twin, generative design, and more. 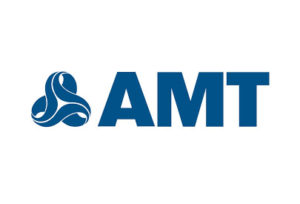 [This is an article taken from the November 2021 NTMA Record]